YES –  Since 1999, the CCP in China has cut out organs from over a million prisoners of conscience, while still alive. This illegal organ harvest is the basis of China’s multi billion dollar international Organ Transplant business.  It’s The China Holocaust.

Organs extracted from the Living 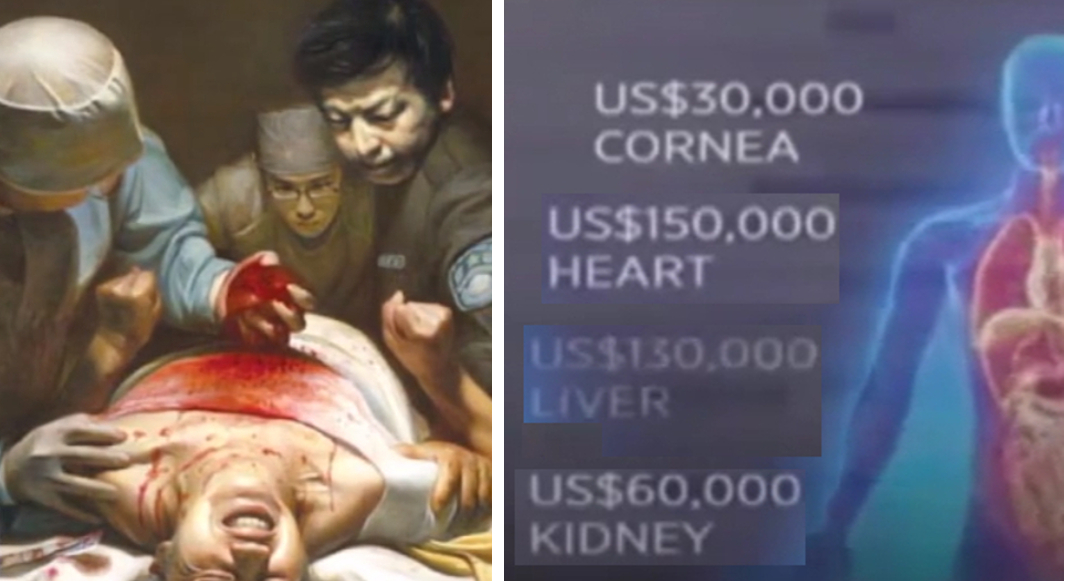 The victims are mainly from the 100 million Chinese (1 in 13 of the population) who were devoted to the peaceful practice of Falun Gong.  It all went wrong in July 1999 when tens of thousand Falun Gongers came to Beijing to ask for legal recognition and freedom from state interference.  The CCP response to this challenge, was to outlaw Falun Gong and round up the peaceful protesters. The persecution continued throughout China.

Falun Gongers are held in concentration camps attached to Centres dedicated to organ transplants.  Organs are supplied on demand and are taken from living Falun Gongers without proper anaesthetic, who die in the process. Well over a million have died in this way in the 23 years since Falun Gong was outlawed.

The organs are also harvested from victims from the Uighur/Muslim,  Tibetan and Christian populations.

The China Holocaust  made public in 2005

The China Holocaust  was made public in 2005 by Ethan Gutmann (The Slaughter) and David Matas (Bloody Harvest).  In 2008 it received worldwide coverage when the China Tribunal in London, UK, investigated and confirmed that the allegations were true. The tribunal is headed by Sir Geoffrey Nice QC.

The mainstream media have ignored and continue to ignore the China Holocaust.  No action has been taken by the UN, by the USA and most governments.  The Olympics took place in China in 2022, in spite of China’s total lack of human rights.   All this rather confirms that the CCP tentacles extend far and wide.  The major news machines have received significant payments from the CCP; effectively paid to give positions of responsibility to CCP moles. 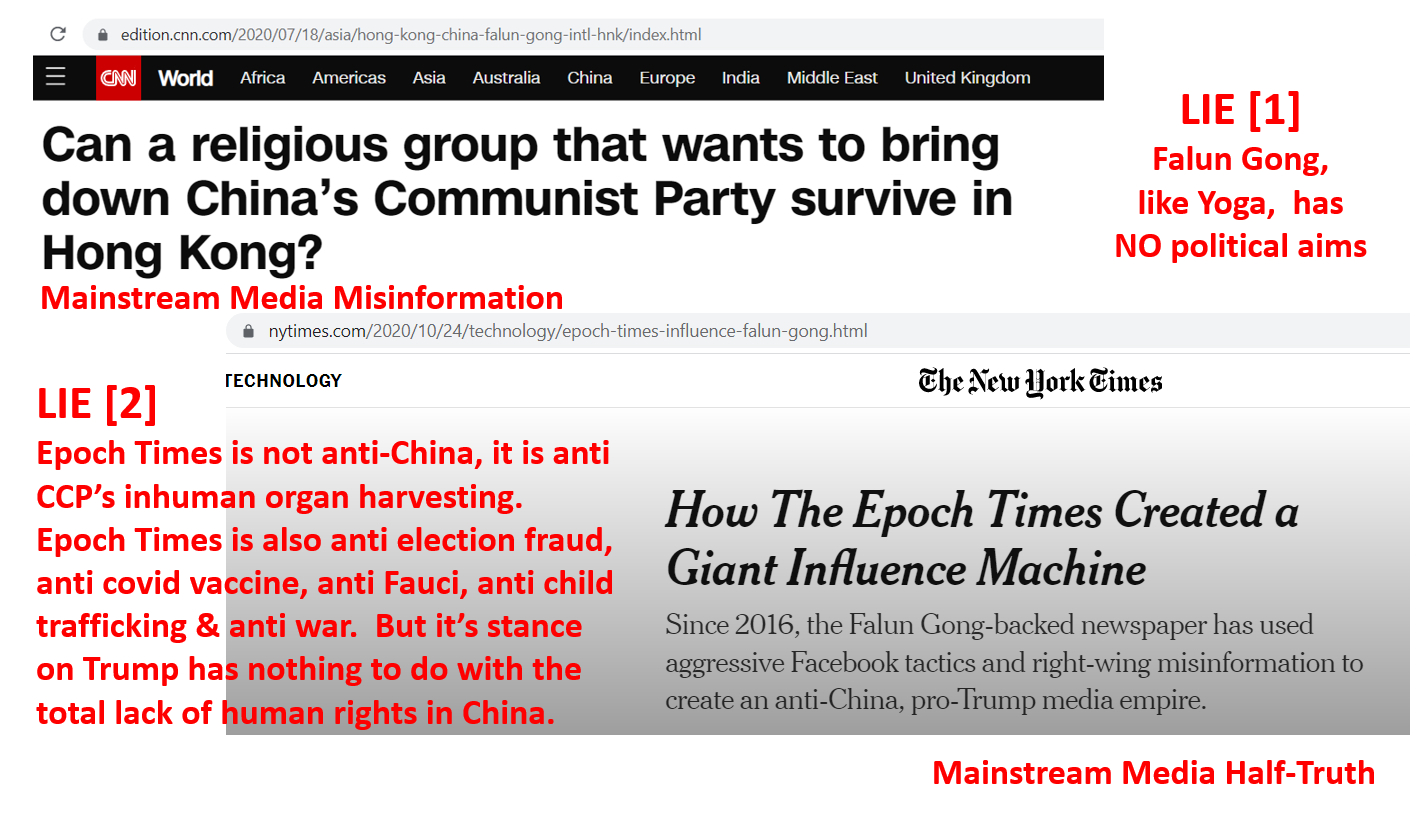 As at January 2023, the only countries to take action and outlaw the purchase of organs from China are Israel, Taiwan, Italy and Spain.

Can we trust the Mainstream Media?

Bodies exhibition is an Insult

The next image is from one of the exhibits in the touring Bodies exhibition.  Most of the bodies have Chinese features and it is extremely likely that you are looking at a victim of organ harvesting. 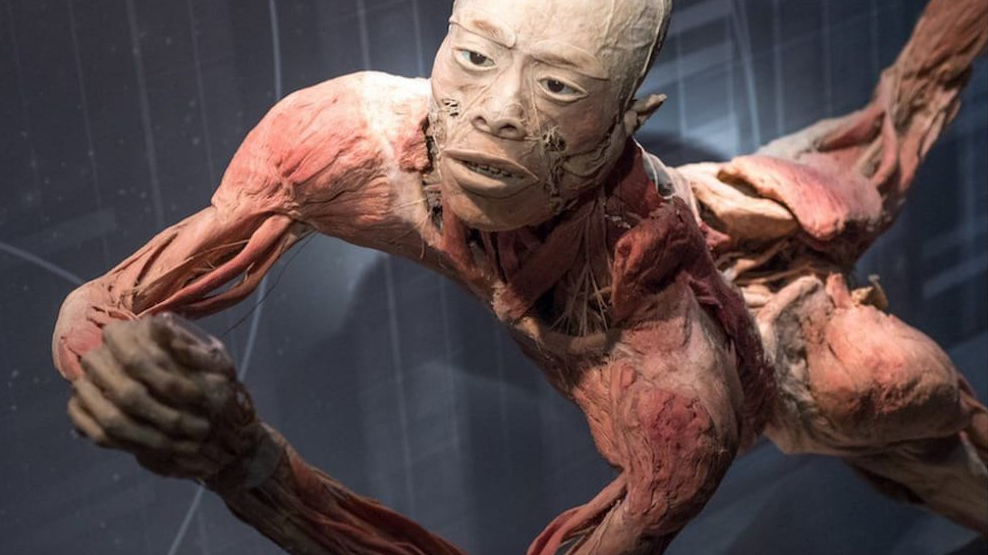 Web Welcome to BODIES, the Exhibition
The Exhibition showcases 13 whole-body specimens and more than 260 organs and partial body specimens.  These real human bodies have been meticulously dissected and preserved through an innovative polymer process.  The bodies are respectfully presented, giving visitors the opportunity to view the beauty and complexity of their own organs and systems.

It is hard to believe that someone could think of something like BODIES , and that masses of people would waste time & money on it.

YES – Agenda 30 is totally anti-democratic, as evidenced by declarations from proponents such as WEF, the World Economic Forum,

Here are some links that give you a glimpse of the future.

Welcome To 2030 a young leaders view of the world after the Great Reset.
WEF Predictions for 2030 – a critical view.

Spain now has a minister for Agenda 30 with its own website. The promotional video talks of over 100 countries signing up to Agenda 30 and its aims to eliminate poverty.  click Official Video for the official line. The only political party to speak against Agenda30 is Vox.

The official video does not say that almost no country has had democratic vote to approve Agenda30.  It also does not say how it is to be achieved. The WEF gives an idea of what is ahead:  Depopulation by vaccine; social control by face recognition and social credits as used in China – Totalitarianism.

Dispossession is also to be expected. It is happening now as businesses have been ruined by successive lock downs .  According to Klaus Schwab , the head of WEF,  in 2030 we “will own nothing and be happy” .

NO – They will stop at nothing, as evidenced by the brutal murder of german Dr Andreas Noack in November 2020, five days after releasing a shocking video about graphene hydroxide in the covid ‘vaccine’. 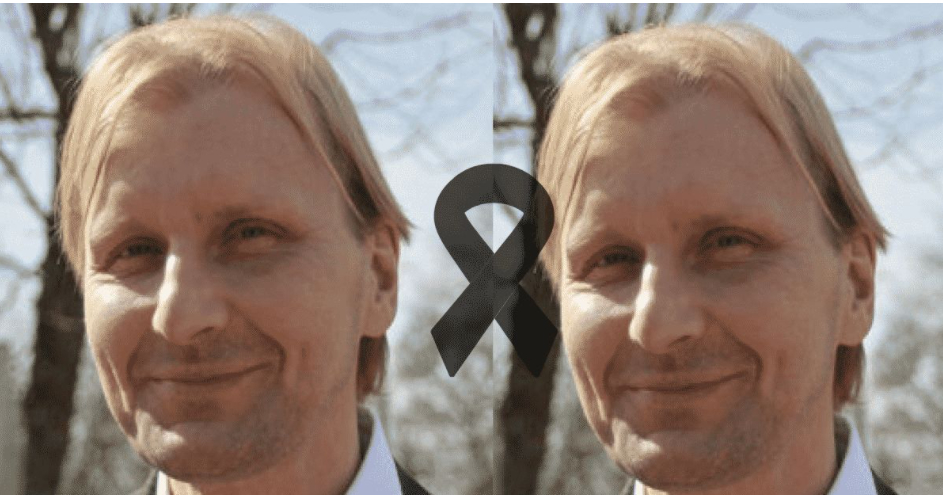 Dr Noack was an expert in Activated Carbon and identified that nano particles of graphene hydroxide in the covid vaccine.  This type of graphene is very hard and cuts like a razor, the last thing you want in your body.

Here are links to the must-see video.   Click seemorerocks for video with English subitles, or buscandolaverdad for Spanish subtitles.

There is also an upsetting video of Dr Noack’s widow confirming that it was murder and calling us to action.

For another sad story about an untimely death, click Brandy Vaughan. Brandy was an active anti-vaxer in USA, where vaccines are almost compulsory for children.

NO.   Not all ETs come from outer-space.  Recent reports indicate that some 20 different races of aliens have settled on earth for long periods and have contributed to the evolution of humankind.

In her ground breaking book on Alien Races, Elena Danaan, tells her story and then outlines the 100+ Alien races who are interested in our Earth, many of whom are present here on earth in one form or another.

Alien Interbreeding over many years would explain why humans are so different in appearance.  The Japanese look may be attributed to a long settlement of the Anaki Race.  The appearance of the indigenous people of the west side of South America owes much to Puxhity settlements many years ago.  Without the visits of the Adari  in India, there would be no blue faced gods in their Vedic texts.

The many alien races include blonde and blue eyed humanoids.  But there are very few aliens with black faces, which suggests that the original inhabitants of earth were black rather than white.

Unfriendly Aliens exist.   The Ciakahrr Reptilians and the Nebu Grays are carnivorous and they have a taste for human flesh.  Just as we prefer lamb to sheep, so they prefer the flesh of children to adults.  For years they have been abducting kids and taking them either to underground bases or to neighbouring planets.  It seems that Startreks’ “Beam me up, Scotty” was closer to reality than we thought.  Hundreds of thousand children go missing every year.

The Ciakahrr and the Nebus, the Dark Alliance, are the power behind the cabal and the deep state and are intent on enslaving humankind.  Back in 1957, they tricked the Americans to agree to exchange access to humans for ‘experimentation’, for technology.  President Eisenhower tried to stop it; but the deal was done behind his back and he could not undo it. Since then alien visits are common place , as are UFO sightings.

Members of the Galactic Federation of Worlds (GFW) or Galactic Federation of Light (GFL)are our friends.  Their eating habits are simple.  If it has a face or a heart, do not eat it.  So we are not seen as food.  They are governed by a law of non-interference, which has held them back.  But the subjection of Earth/Terra could make the Ciakahrr Empire unstoppable, and  the GFW are now intent of saving Terra (earth) from enslavement.

In her latest book, “We will never let you down”, Elena Danaan reports that the GFW has all but completed the expulsion of the Dark Alliance  from Mars, from the Moon and from their underground cities in the Earth.  But it is up to us to bring down the Deep State.  The way forward is for us to raise our frequency towards the 5th dimension, which cannot be reached by the Dark Alliance.

Right now, the deep state is pushing hard to break resistance,  controlling the media and pushing everyone to be injected by a bio-weapon and enforcing a 5G grid.  Vaste numbers have been injected with an MRNA ‘vaccine’ containing graffine, that makes them a receptor.  G5 is already causing problems for many – headaches and brain fog.  When the power is ramped up, G5 will be used to control the people.  Your thoughts will not be your own, and the minority who have resisted the vaccine will be easily neutralised.  If nothing happens, we will slide into enslavement.

Individuals can protest all they want.  But to turn this around, people in positions of authority need to make a stand, and take control of the media away from the deep state. God willing, emisaries of the GFW will convince the right people in the Earth Alliance to act.

Is this Fact or Fiction?

Only time will tell.

Dr Stephen Greer has been tracking ETs and UFOs for 30 years and warns of the next fear play to be expected… a fake alien invasion.  Click The Cosmic Hoax for his latest video.

Possibly YES – JFK Junior is about to make a come back.

It was mooted by Jan Osgebaard last year in her “Fall of the Cabal” series that JFK junior was still be alive.  It seemed somewhat far fetched then.

But it seems that it could be so.  Kerry Cassidy of Project Camelot is clear that he is one and the same as Juan O’Savin, who is an active commentator on social media. 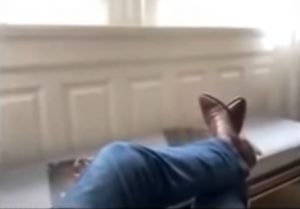 search duckduckgo with “savin kennedy” and you will see that FCP is not alone.   All very strange.  What’s it all about?  Hopefully all will be revealed in the not too distant future.