Chlorine Dioxide (ClO2) is an oxidising agent derived from chlorine (Cl);   1 atom of chlorine and 2 atoms of oxygen.  In its concentrated form, Chlorine Dioxide is  known to kill viruses and is used widely to purify water .

MMS or Master/Miracle Mineral Solution was discovered over 40 years ago by Jim Humble, while exploring in Africa, some of his team went down with Malaria. He mixed water purifier which a little water and hey presto the malaria went away. Since them MMS has been found to be a good treatment for numerous other conditions from Autism to Arthritis to Alzheimers.

The US government would never have authorised a trial of CDS, if it was dangerous to consume.  The daily dose specified in the government trial, detailed below, is a few drops in a litre of water, and cannot be compared to drinking chlorine or bleach.

Early in 2020, CDS was recognised as a possible treatment for Covid19  and a CDS trial was planned. See Government Trial  for details.

The Doctor in charge of the trial was named as Dr Eduardo Insignares,   Dr Insignares has been a champion of CDS and has been obstructed in the study by the Columbian government that prohibited the use of CDS.

Nevertheless Dr Insignares has persevered and in this video  he confirms that CDS really works.  See
Dr Eduardo Insignares

At the end of August 2020 there are no sign of results and questions are being raised.   See Maldita report in Spanish.  Maldita is a typical ‘truth’ site , full of misinformation.

The trial defined the dose to be used on the 20 patients as  “10 ml of 3000 ppm chlorine dioxide are added to 1 liter of water, per day. One part is taken every hour, until the content of the bottle is finished (8 to 12 shots).   Both the original dioxide bottle and the preparation for the day should be kept refrigerated.”

If you are taking other medication, start off with 5ml in  a litre of water.  For the first few days, it may upset your stomach, so make sure that your stomach is not completely empty ..  and reduce the frequency of taking CDS.  The most important thing is sticking with it.

5ml is an almost homeopathic dose – 0.5% chlorine dioxide, 99.5% water, and no side effects are expected.  Like aspirin, it is quite safe to take the suggested dose; but if you drink straight from the bottle without diluting it, you are being irresponsible and asking for big trouble.

Andreas Ludvig Kalcker, trained in Alicante, Spain and has been leading the charge to get CDS accepted and used.  He has 100+ Covid19 cases that have recovered with CDS.  the  AndreasKalcker website includes a protocol on how to take CDS (reproduced below) and even tells you how to make it. see How to make CDS. 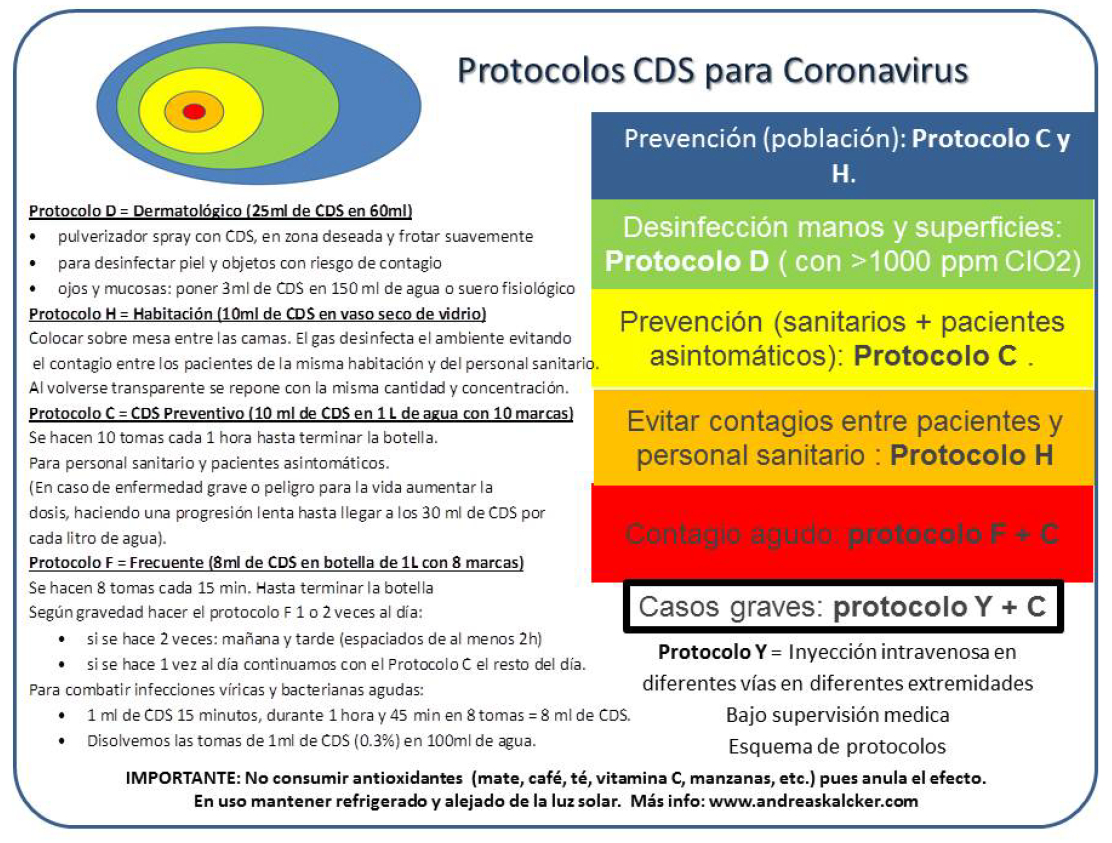 Click How to use CDS for a clear video in Spanish.

Kalcker developed and patented the method of production of medicinal CDS; with an OPEN patent, so anyone may freely produce CDS. He effectively gifted CDS to th world, which makes him a true Hero of the 21st century.

CDS is not a hoax

CDS works for many, and could work for many more, if doctors were allowed to prescribe it.  No only is it a cure, but  it prevents the virus by strengthening the immune system.

‘Fact Checker’ websites spread mis-information.  The biggest and most dangerous lie is that Chlorine dioxide is the same as common Bleach.

CDS is not bleach

The worst is that they say that Chlorine Dioxide is the same as bleach, and many have believed them.   People in desperation have been making themselves ill, drinking a mix of bleach and water, You should not drink bleach in any circumstances.

Snopes labels  Chlorine Dioxide as a bleaching agent and runs the headline .   “Are People Attempting to Cure Their Children’s Autism with Bleach Enemas? “.   (The enemas are used to eliminate bio-film and parasites / worms that proliferate protected by the  bio-film.  Parasites interfere with gut bacteria, which can lead to neurological problems.   CD / MMS has cured 100s of autistics.)

There are many websites in Spanish that persist in defaming CDS, with no supporting evidence.  Sites include:-

Valenciacity.es is a typical example of sloppy journalism, with no supporting evidence, apart from the fact that the World Health Organisation has not approved CDS.

CDS is not a Hoax

CDS (Chlorine Dioxide Solution) is no more dangerous than aspirin.  If you take a bottle of aspirin you could die.  Similarly CDS could be dangerous, if you drank straight from the bottle.  If anything CDS is safer than aspirin, because it is so unpleasant in its concentrated form,  that it would be very difficult to drink enough to cause damage.

CDS works for many, and could work for many more, if doctors were allowed to prescribe it.  Why wait for a vaccine when a low cost cure is available right now.